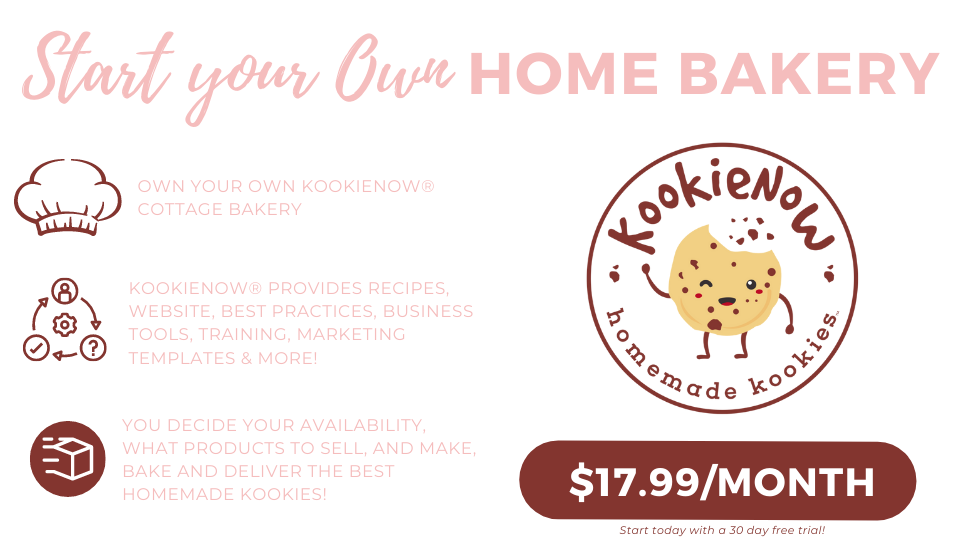 But unlike Janna, Amanda has no plans to shutdown her business anytime soon. Quite the opposite, in fact. Her cookie business is absolutely thriving!

She has over 26k followers on Instagram, is always fully booked months in advance (despite her high pricing), and now runs an increasing number of cookie decorating classes that bring in about $2,000 each.

But as glamourous as all of that may seem, Amanda is very open and honest about the fact that trying to juggle everything as a one-woman show has definitely not been easy, especially as a stay-at-home mom of two young kids.

In this episode, you’ll get to hear how Amanda went from knowing absolutely nothing about cookie decorating to building the super successful business she has today.

Minnesota used to have one of the most restrictive cottage food laws in the nation. In 2015, they passed a new law (SF 5) which greatly improved their law, and then they further improved it in 2021 by passing an amendment (SF 958). Cottage food producers can sell almost any type of nonperishable food, but they… [read more]

You know those kettle corn vendors you see at fairs that pump out mass quantities of popcorn, and make it live on-site?

That’s what Payshee Felt and Steve Bivans now do (except in a not-so-generic way) in St. Paul, MN with their popcorn business, Payshee’s Popcorn.

But they didn’t start that way. They actually used their cottage food law to prepackage dozens of bags of homemade popcorn for their local farmers market each week.

And they did that from home for two years before they were ready to make the leap to some pretty-pricey equipment for popping tons of popcorn live at events.

They have gone from making just a few hundred dollars each weekend, to now selling over $5k of popcorn in a weekend!

Initially, Payshee romanticized her vision for the business, imagining herself custom-flavoring each bag for a customer in real-time, and serving it from a Cretors wagon.

That idealistic vision not only delayed their business, but also cost them a pretty-penny before they realized that they should just keep it simple and start from home.

When Safeera Inayath immigrated to the United States from India back in 2010, she had never baked a cake in her life. Now cakes ARE her life, and she has over 10,000 Instagram followers!

Safeera lives in Prior Lake MN, and sells custom cakes, macarons, and other baked goods with her cottage food business, Sugardust & Sprinkles.

Aside from creating amazingly elegant and high-end baked goods, Safeera’s food photos really stand out. Her photography looks truly professional, even though she takes all of her photos with a smartphone.

By investing in photography skills and focusing on Instagram, her business has taken off. Brands and organizations have contacted her with a variety of money-making opportunities, including teaching, promoting a brand’s products, and even designing new products.

It all started with the wrong baking pan. Back in 2014, Nicole Pomije couldn’t find a cookie sheet in her home kitchen, so she made her chocolate chip cookies in a mini muffin tin instead.

And with that, the idea for The Cookie Cups was born: cookies that look like mini cupcakes. Nicole started her business out of her home kitchen in 2015, and she has now expanded into two brick-and-mortar storefronts near Minneapolis, MN.

Although it might seem like Nicole’s unique idea set her up for success, it’s more likely that her many years of marketing, PR, and management experience played a much larger role.

While the cookie-in-cupcake-form is still at the core of her business, Nicole has now expanded well beyond selling cookies. She’s managed to put all kinds of food items into mini cupcake form, such as tacos, mac & cheese, pizza, etc. She now caters events, hosts birthday parties, teaches cooking classes, and has most recently created at-home baking kits in response to the pandemic.

Nicole talks about the importance of sharing your story, managing time, starting simple, building a local following, and constantly being willing to try new things.

Erica Smith, who works for the Institute for Justice, is a major advocate for the cottage food industry. She and her team have worked with dozens of cottage food businesses to spearhead many of the recent cottage food and food freedom law improvements across the country.

I wanted Erica to shed some light on how the coronavirus pandemic is affecting cottage food businesses and what steps people can potentially take to improve their situation.

Many states’ restrictions are preventing cottage food producers from adapting their businesses in a safe way right now, and Erica came to me with the idea that this current situation could actually help spawn some improvements in many states’ laws.

In addition to that, Erica discusses the current law changes (including Wyoming’s greatly improved law), what they have worked on in the past, which states they’re targeting in the future, and why this industry is so important.

A couple bakers in Minnesota, along with the Institute of Justice, have just taken the state’s Department of Agriculture by surprise. As part of IJ’s Food Freedom Initiative, they are filing a lawsuit that is designed to question the very premise of the cottage food law in Minnesota. But in the bigger picture, they are… [read more]