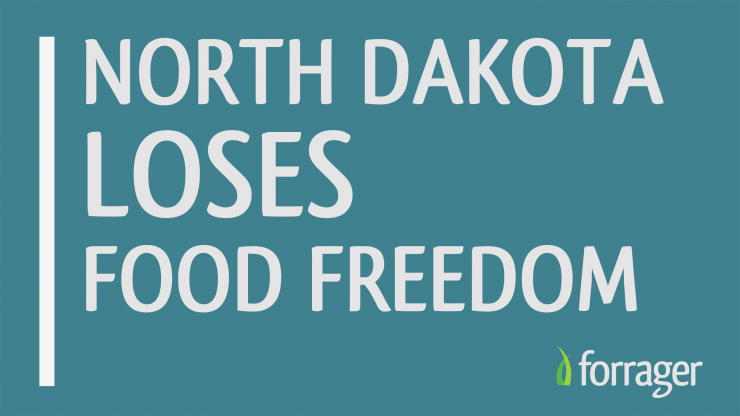 We just started 2020 and we already have a cottage food law update!

Except this time, it’s not a good one.

Actually, as far as I recall, this is the first time an established* cottage food law has regressed.

A Law Gets Recalled

As of January 1st, 2020, it is no longer a food freedom law, and has regressed into a good cottage food law.

What happened? Briefly, the North Dakota Health Department created some rules and added those to the state’s administrative code to override key parts of the food freedom law.

You might be thinking, “There must have been problems with the food freedom law. The health department probably received many complaints.”

At least that’s what I thought. And I thought wrong. In fact, they never received ANY complaints about the new home businesses.

Ultimately, it came down to one thing: imagined threats.

Over the years, I have seen a lot of resistance from health departments. So much so, that I can often spot weaknesses in laws, as I mentioned when discussing CA’s most recent law.

But I didn’t see this one coming, because the food freedom law makers did exactly what they were supposed to do. They actually added a line explicitly to prevent this from happening:

“Notwithstanding any other provision of law, a state agency or political subdivision may not require licensure, permitting, certification, inspection, packaging, or labeling that pertains to the preparation or sale of cottage food products under this section.”

Basically it’s there to say: “A government agency cannot swoop in and undermine this law. It is here to stay, until another bill amends or replaces it.”

Publicly, the health department claims that they are not changing the law at all, but just clarifying the existing law. But anyone who looks at their rules can see that’s a bunch of phony-baloney.

To be fair, it is true that a lot of their rules do clarify the law, sometimes even in a helpful way. But the overall intent behind this effort was not to clarify — it was to amend.

The Spirit of the Law

Let’s step back for a moment and ignore technicalities. How does the legislative system work?

As I see it, basically individuals can propose an idea for a law, then people show their support for it, and there are representatives in the legislature to represent the public interest for that idea. There are some checks and balances thrown in there to make sure that it’s fairly difficult for an idea to be accepted into law.

The idea behind the food freedom bill was to remove as much red tape as possible for those selling homemade food to others in their local communities. In reading that law, it’s pretty simple and elegant, while still covering its all its bases (or so we thought).

The intent of the law was to allow someone to sell a veggie casserole without needing special permission. And with the food freedom bill becoming law for two years, North Dakota got to experiment with a less regulated food supply.

How did it work? Many people loved using the law, and nobody complained about getting sick. To me, that’s an indication that the new law was working well.

But clearly, the health department thought that the law would work even better, if only it had a good dose of regulation added to it!

The Health Department Rises Above The Law

It gets even crazier though. Early in 2019, the health department did pursue the normal course of changing a law.

They created a bill (SB 2269) that included the amendments they wanted to make. It would have changed the law significantly, but ultimately the legislature did not approve it.

If that happened to a normal individual, they’d either cut their losses, or change something in the next legislative session by crafting a new bill. They’d have to start all over again, and that’s exactly what has happened to many cottage food law supporters.

But the health department is no mere mortal. They have the power to bypass the legislative system and propose rules.

And what rules did they propose? Basically the same ones that the legislature rejected. The Administrative Rules Committee decided not to reject them, so they became law.

Food Freedom vs The New Rules

So with the new rules in place, North Dakota now has a law that somehow looks similar to the one passed in 2017, yet is hugely different.

The biggest difference is that perishable foods and many home-canned goods are NOT allowed, with a few exceptions. So now, a green bean casserole, as well as canned green beans, are not allowed.

But even worse, look at this line from the original law: “Transactions under this section may not:… Include the sale of uninspected products made from poultry, unless:…”, and then (to paraphrase) it goes on to say “…unless the producer slaughters no more than 1,000 poultry per year”.

That line above is important because it’s explicitly saying that if a producer DOES raise a small number of poultry, then they CAN sell uninspected products MADE FROM poultry. The words “made from” are the key, as this would include a chicken pot pie.

And yet, the new rules prohibit anything that includes cooked poultry! The health department is “interpreting” this section of the law to mean that only raw and frozen poultry may be sold by small farmers.

So it is clear in my mind that the health department is doing much more than clarifying the existing law. In fact, they are changing it significantly, which is something that the law was supposed to prevent them from being able to do.

Basically, the health department created a law that breaks another law.

Now I’m going to play a bit of devil’s advocate. Don’t get me wrong, I think it’s absurd that the health department even has the power to undermine a law like this.

But that being said, I do understand why they did it. Because even though there have not been public complaints YET, they know the risks of low-acid canned goods and items with meat in them.

They know that if enough people use the law, it is only a matter of time before these issues will come up. Their job is to protect the public health, and the food supply.

It’s entirely possible that a home cook could introduce a threat to the public health.

But here’s the thing: even highly-regulated commercial food establishments and trained professionals introduce threats to the public health all of the time.

And guess who gets to deal with those outbreaks? That’s right — the health department.

So they could likely justify breaking the law in order to change the rules, in order to do their job.

Also, I will say that I was somewhat impressed by how much they left in the law. For instance, unlike most states, they are allowing perishable baked goods, acidified foods, and frozen produce without any license or training required.

Ultimately, it is what it is, and this is the government system that we have to work with. This is why two states (Minnesota and Wisconsin) have already successfully sued their agriculture departments, and a third state is in that process right now.

I feel sorry for all of the good people in North Dakota who support food freedom and helped create their law, because now they need to go back to the legislature and write a more robust piece of code that clarifies that yes, the legislature did intend to allow chicken pot pies when they passed the bill over two years ago! History repeats itself, right?

* When Wyoming created their food freedom law back in 2015, they allowed people to sell anything and everything. It didn’t take long for the USDA to hop on that and ban anything made with uninspected red meat. So in that case, the Wyoming law regressed shortly after going into effect, which is why I used the term “established”.