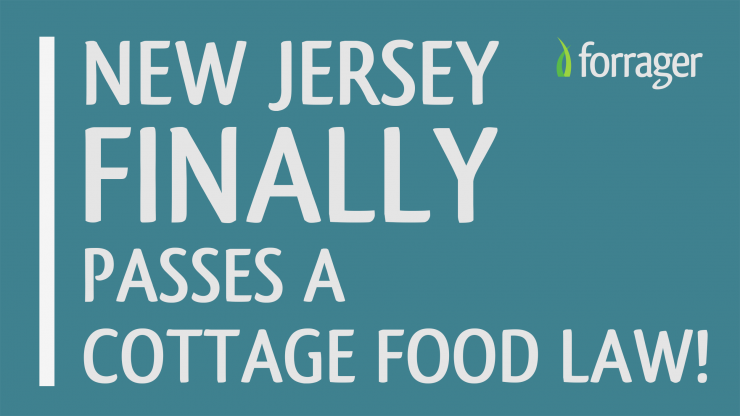 Although the new cottage food rules passed on July 12th, they will not take effect until the rules get published by the Office of Administrative Law (OAL).

In other words, this law isn’t usable just yet. And once the law gets published (likely by mid-September), it’s not entirely clear how long it will take for the health department to start approving permits.

But since the health department created these rules themselves, and they already created the application, it does seem like the approval process will start soon after this officially becomes a law.

With over half of the states working on improving their cottage food law, 2021 already has been the biggest year ever for cottage food developments. New Jersey’s law is a big fat cherry on top of all of that!

About The New Law

So what is the actual law, and how good is it? Overall, it’s a pretty good law. Here are some of the highlights:

What makes NJ’s law especially good is the fact that someone might be able to get approval for any type of non-perishable food.

What makes it more restrictive is the fact that someone needs to take a more complex (and expensive) food manager training, which I think is overkill for someone limited to making non-perishable foods and unlikely to have employees.

Also, the application requires someone to list each type of cottage food product they intend to sell, along with the major allergens they may contain, which is a bit burdensome.

How did we get here? It has been a loooong road. New Jersey first tried passing a cottage food bill in 2009, back when few states had a cottage food law. That bill kept getting pushed from one legislative session to the next until 2015, and it was getting passed unanimously on the Assembly side.

Finally it became clear that there was only one thing holding them back: Senator Joseph Vitale, who is the chair of the Senate Health Committee and single-handedly blocked any and every attempt. It’s unclear exactly why Vitale did this, but most likely it was because he felt like cottage food businesses would present unfair competition to commercial bakeries.

In recent years, New Jersey has been making headlines, since it is simply absurd that they could not get a bill passed. Some form of a cottage food bill has appeared in every single legislative session since 2009. The Institute for Justice helped some bakers initiate a lawsuit, which is still an open case but hasn’t led to a resolution (though it likely led to more awareness about the problem).

Finally, in 2020, the health department stepped in and used their rule-making powers to propose cottage food rules, which are what finally passed (with a few minor amendments). They received over 700 comments on those rules, and it’s taken about a year to finally get them approved.

Therefore, the cottage food advocates in New Jersey actually decided not to move forward with that cottage food bill, in hopes that they could amend it, or that the health department’s efforts would pan out. And now we know that that was the right decision, even though it likely delayed them from having a law for an extra year.

The New Jersey Home Bakers Association will have more updates and details about this new law. You can get on their email list, check out their Facebook page, or go to their website.

Congratulations to New Jersey, and thanks to the MANY individuals who worked tirelessly over the past ten years to get a law passed!

Ironically, Senator Vitale’s efforts have led to a huge awareness of the missing cottage food industry in New Jersey, and I would expect hundreds (at least) of cottage food businesses to crop up within the next year!