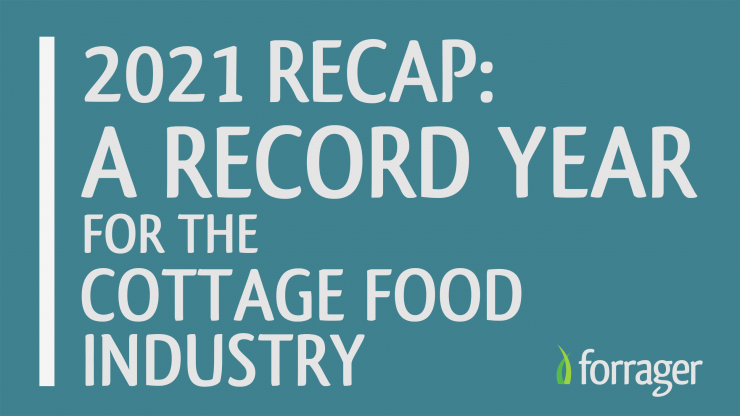 Not only did a ton of states improve their laws, they improved them by a LOT. A dozen states made big changes to their laws this year. In most years, only about one or two states implement major improvements.

Most notably, New Jersey became the last state in the nation to pass a cottage food law (FINALLY!), so now all states have a law allowing the sale of homemade food.

See the 2021 Cottage Food Bills page for a detailed list of each state that tried to improve their cottage food this year.

Here are some of the trends that I noticed in 2021:

This year, more states initiated food freedom (or freedom-ish in some cases, IMHO) bills than ever before.

We are learning that food freedom can mean a lot of different things, depending on the state, but generally food freedom laws are excellent laws that eliminate most (or all) government oversight.

Montana’s food freedom law is the most similar to what we’ve seen before (in WY, ND & UT), and it’s made it much easier to sell homemade food there.

Arkansas emerged as a leader with their very impressive new law. The only thing they’re missing is allowing perishable foods (like most food freedom laws have).

Up until this year, three of the nation’s largest cities (Boston, MA; Miami, FL; Albuquerque, NM) completely prohibited cottage food businesses, despite being in states that have cottage food laws.

This year, Boston created an ordinance to allow cottage food businesses, and Florida and New Mexico updated their laws to force cities to allow these businesses.

In addition, two successful lawsuits eased restrictions this year. Wisconsin’s lawsuit confirmed that all nonperishable baked goods are allowed (not just flour-based ones, as their state’s ag dept ridiculously tried to claim). And a lawsuit in Lincoln, Nebraska removed burdensome restrictions there.

Minnesota was the only state to prevent cottage food entrepreneurs from forming LLCs for their businesses, but they passed a bill this year to remove that restriction.

I would also lump Illinois into this category, since their health department has been very restrictive for many years. This was a breakout year for them, as their new law will allow producers to sell at venues other than farmers markets. It will also finally do away with the very restrictive Home Kitchen Operation law.

And certainly, New Jersey’s new law eliminated the most extreme form of government red tape that our industry has ever seen!

Brand new for 2021, we now have states that are explicitly allowing interstate shipping!

Arkansas, Florida, & Oklahoma now allow producers to ship to other states. There are some other states (like PA) that already allowed interstate shipping, but it’s much more complex to become a cottage food business in those states.

However, there is one big catch: even though states are now allowing producers to ship interstate, technically the consumer also needs to live in a state that allows it.

I see this trend continuing into the future, and as more states start allowing this, it will become easier for producers to sell their products across the nation.

States are recognizing that they don’t need to impose sales limits in order to ensure food safety.

Alabama, Florida, and New Mexico all removed their sales limits. Technically FL’s is now at $250k, but that’s essentially unlimited for a home food business.

This year, I had Justina Rucinski on Episode #40 of The Forrager Podcast. Justina’s horrific experience in 2019 kickstarted a wave of law changes to remove the unnecessary requirement of placing a home address on product labels.

We saw this trend start in 2020, and this year, 5 states (AL, AR, IL, MN, & MT) followed along by removing the requirement. Also, New Jersey chose not to add a home address requirement to their new law.

My guess is that it’s only a matter of time before most states remove it.

California was the first to pioneer the early seeds of the micro-restaurant (AKA micro-enterprise home kitchen operations, or MEHKOs) movement, but it took a global pandemic for counties in CA to start taking the new law seriously. In certain parts of CA, this industry is now growing fast!

This year, Utah successfully created our nation’s 2nd MEHKO law, but unlike CA’s, it applies to the whole state, not just to counties that opt-in.

We will likely see this movement continue to grow rapidly in the years to come!

As you can see, 2021 really was an amazing year for the cottage food industry!

Looking ahead to next year, we can expect more good things to come in 2022:

Hi David!
Michigan is finally seeing movement on bills to increase our sales earnings max (currently $25K), remove personal info from labels, & to allow shipping. Do you have a spreadsheet to aid us in referencing what other states are doing when speaking to legislators? I’m also hoping to talk to those people in states who recently got this done morning (to understand what objections they received & what rationale was effective). Also, is there an online file (or matrix of all the states) with regards to these three policies?
Best,
Christine

Not yet, but that is something I am trying to create this year. For the shipping and sales limit, this document (current as of Spring 2021) might help. As for the labels, I’m starting to document that behind the scenes on the site, but it’s not visible anywhere yet. However, pretty much all of the states that have changed that policy did so last year. I think there was only one other in 2020.