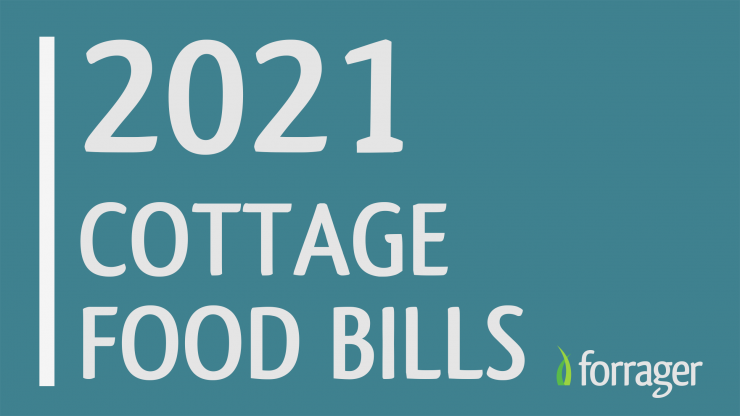 2021 is a fresh start in so many ways, but never have so many states looked to refresh their cottage food laws!

This year is truly unprecedented. Over half of the states tried to improve their laws for selling homemade food, whether that be through a cottage food law, food freedom law, micro-restaurant law, lawsuit, rule change, or city ordinance.

In most recent years, usually about 6 states would update their cottage food law. But with a whopping 26 states working on a cottage food reform this year, things are looking better than ever for the cottage food industry!

Remember, these are only bills/initiatives, and they might not be laws yet. Please check the status and effective date at the top of each section. This post was updated on 7/1/2021.

This will be a huge update to Alabama’s cottage food law, and improve it in many ways.

First, it will allow most non-perishable foods, instead of only baked goods, jams/jellies, dried herbs, and candies.

It will also remove the $20,000 sales limit. Alabama will join the 30 other states that have no sales limit.

Finally, it will allow online sales and in-state shipping of products. Alabama will no longer be categorized on Forrager as one of the more restrictive states!

This was an extremely simple bill that aimed to add roasted coffee and gluten-free baking mixes to the list of allowed foods. With SB 160 (above) passing, these foods will now be allowed, along with many others.

Interestingly, unlike almost all states, it specifically allows interstate sales, as long as a producer “complies with all federal regulations regarding food safety”. It’s not clear what that entails, or if shipping is allowed.

Unlike other food freedom laws, this one does not allow any type of perishable foods to be sold. Rather, it simply frees producers from any state licensure or government oversight.

However, it will allow all types of non-perishable foods to be sold, and they can be sold almost anywhere, including grocery stores and most retail shops.

This bill would allow in-state shipping of cottage food products, raise the sales limit, and ease the restrictions on indirect sales throughout the state.

This is a significant improvement to FL’s cottage food law.

It allows shipping within the state, and also raises the sales limit from $50k to $250k!

This aims to be a massive improvement to Illinois’ cottage food law.

IL’s current law only allows sales at farmers markets. Most importantly, this bill would allow most types of direct sales in the state, including sales from home, events, roadside stands, etc.

This bill does add some restrictions and government oversight, like a paid registration process, but overall, the benefits are easily worth the tradeoffs.

IL has also had a law for home kitchen operations for over 6 years, but only a few counties allow it, and it’s pretty limited anyway. This bill would remove the HKO law and effectively replace it with something much better.

Indiana has always had one of the most restrictive laws in the nation, and unfortunately, this bill doesn’t directly change that.

However, it does hold promise that Indiana’s cottage food law could improve a lot in next year’s session.

Initially, this bill tried to expand the allowed sales venues beyond just farmers markets, but lawmakers were not ready to pass that. A related bill (HB 1103) also did not pass.

Instead, this bill creates a working group, and that group is tasked with determining recommendations for cottage food businesses. Most likely, the group’s findings will be used to try to pass a bill next year to improve the law.

To learn more, and to help, please see this Facebook group.

This was Iowa’s attempt to create a food freedom bill, which mimicked many features of other food freedom laws around the country. However, it would have only applied to farmers.

This simple amendment aimed to increase the sales limit from $25k to $100k.

Boston has never allowed cottage food businesses, even though Massachusetts has had a law for “residential kitchens” for over 20 years!

MN’s initial bill (HF 1430) was ultimately added to a larger omnibus bill (SF 958), which almost didn’t pass because some other (non-cottage food) parts of the bill were controversial. Omnibus bills come with pros and cons… fortunately the pros outweighed the cons this time!

Minnesota’s cottage food law currently has the lowest sales cap of any state, but that is changing this year! The new law will raise the sales cap from $18,000 to $78,000.

MN also has a simpler exemption for those who sell less than $5,000 of products per year. This bill maintains the $5k exemption, but will continuously increase it to keep up with inflation.

This was an extremely simple bill that intended to allow online sales.

This bill aimed to allow online sales and remove the $50k sales limit.

This is a big win for Montana! Their food freedom bill follows in the footsteps of the food freedom laws in Wyoming, Utah, and North Dakota.

This bill massively expands the types of foods that can be sold, including most perishable (refrigerated) foods.

Montana was one of the few states that had a complex application process. But now, producers don’t need any kind of permit from the health or ag department.

This ordinance is a big improvement for anyone who lives in NE’s second-largest city.

The city of Lincoln, NE changed their ordinance to make it much easier to start a cottage food business. Honestly, it’s something they should have done when Nebraska passed an improved cottage food law in 2019.

This ordinance change was in response to a lawsuit from the Institute for Justice last year.

Up until this year, New Jersey was the only state with no form of a cottage food law. Their new law is the biggest cottage food news of the year!

Click here for more details about the new law and how it came to be, and check out this Facebook page for updates.

New Jersey also had a bill (A4580 / S73) in the works, but that would have likely been more restrictive than these new rules.

Congratulations to New Jersey, and the MANY individuals who worked tirelessly for OVER 12 YEARS to create a cottage food law!

Finally, a bill that would make NM’s cottage food law much more reasonable.

Previously, New Mexico had one of the most complicated permit applications in the nation. It wasn’t easy for someone to start a cottage food business, and that’s probably why very few ever did.

Also, New Mexico was one of the only states to ban sales from home. They only allowed sales at events, farmers markets, and roadside stands. On top of that, Albuquerque (the largest city) did not allow cottage food businesses at all.

This new law changes most of that. Anyone in New Mexico is now able to start a cottage food business (including those in Albuquerque). They can sell from home and online, and they can also ship their products within the state.

This bill also removes the requirement for a permit, though counties can choose to require a cottage food permit if they would like. It’s not yet clear how many counties will maintain the complex permitting system that is currently in place.

As they have done in the past, New York’s ag department improved its cottage food law by updating administrative rules.

Now home processors in the state can sell indirectly through restaurants, retail stores, and other wholesale venues.

New York has now published a list of all registered home processors in their state, showing that they had over 8,000 home processors as of July 2021. This is about three times as many producers as they had in 2018. The pandemic, which initially hit New York the hardest, caused a huge influx of interest in the cottage food industry in this state.

Aside from New Jersey’s new cottage food law, this is the biggest improvement of the year for any state. Oklahoma has consistently ranked as having one of the worst cottage food laws in the country.

Now they are going to the opposite end of the spectrum, since they just passed one of the best laws in the country!

Here are some of the most notable improvements:

Finally, Oklahomans will have a great cottage food law!

Aside from New Jersey (which has no cottage food law), Rhode Island’s cottage food law is currently the worst cottage in the nation, since it’s only accessible to farmers.

This bill mainly aims to allow anyone (not just farmers) to sell homemade food products, but it also aims to expand sales venues and allowable products.

This would be a big change to South Carolina’s cottage food law, by allowing the sale of all nonperishable foods, instead of just “candy and baked goods”.

It would also allow online sales, in-state shipping, and sales at retail/grocery stores.

Finally, it would change the home address requirement on product labels.

This bill aims to change South Carolina’s cottage food law by allowing the sale of all types of food, including perishable foods.

If passed as initially drafted, SC would easily have the loosest restrictions in the country for homemade, perishable food sales. It also would likely conflict with federal regulations.

For those reasons, it is unlikely to pass in its current form.

This was South Dakota’s attempt to create a food freedom bill, which would have been similar to some of the best food freedom laws around the country.

This was Tennessee’s attempt to create a food freedom bill. If passed, it would have been similar to most of the other food freedom laws in the country.

Most notably, Utah’s MEHKO law doesn’t suffer from California’s horrible opt-in limitation. For that reason, Utah’s law is much better than CA’s.

Granted, there are still plenty of requirements and restrictions for these mini restaurants, but when combined with Utah’s existing food freedom law and cottage food law, Utah is likely the most favorable state for selling homemade food.

They are the first state in the nation to allow someone to sell virtually any type of homemade food!

It would have let people run mini-restaurants from home, albeit with a lot of restrictions.

Wisconsin seems to need lawsuits to enable the sale cottage foods, but they’re working! They just won another lawsuit.

Their 2017 lawsuit (against the state ag dept) allowed people in the state to sell non-perishable baked goods. The ag dept didn’t agree with that ruling, and created an arbitrary rule that only baked goods that contain flour would be allowed. Quite frankly, it was ridiculous!

For this lawsuit, a judge once again sided with cottage food advocates, and ruled that the ag dept had no right to limit baked goods sales to just those that contain flour.

It allows people to sell eggs under the law, and clarifies that there should be as few restrictions as possible for businesses using this law.

Please update the Florida page in the “Laws” section of the site to reflect the changes that went into effect July 1, 2021. It’s already mentioned in the “2021 Cottage Food Bills” page, but the “Laws” page still shows the old limitations. Thanks.

Yes, Florida is one of the states I still need to update! Thanks for the reminder!